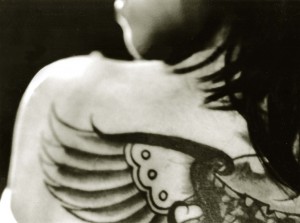 “We need to tattoo images of Christ on our hearts,” our speaker said in this morning’s sermon. He was borrowing a line from Fr. Gregory Boyle, a Jesuit priest who works with former gang members in Los Angeles, and who wrote a book about his experiences titled Tattoos on the Heart.  Our speaker shared a few stories to illustrate what he meant, and I found myself reflecting on a recent example in my own life that left a lasting mark on my understanding of what it means to be part of the body of Christ.

A week and a half ago, my editors at Gamechurch.com, Drew and Rich, asked me if I would write an article about the recent wave of harassment of female video games writers in the wake of the “Gamergate” and “Not Your Shield” conversations that have been happening on social media. They’d seen my emotional reaction to some of these events on Thursday, and thought that my voice would be an important one to add to the conversation.s

It was a challenging thing for me to write, and I spent a good portion of last weekend working on it. It was work I didn’t want to take lightly. I thought it was important that I speak up when other women’s voices are being silenced.

For all that I thought I was being forthright and honest in my writing, Rich could see what I couldn’t, that I was holding back. As he read my second draft on Sunday evening, he asked me in a conversation over Facebook, “Are you afraid of writing about emotion? I feel like you stripped out a lot of the emotional language here.” I was taken aback, thought for a moment, and then replied that yes, maybe I was. “I think I’m afraid of being seen as naive, ignorant, and a radical feminist extremist,” I told him.

“Just Tell The Truth”, he said. “The whole point is to show how this junk affects people.”

Something in me broke open that I didn’t even realize I’d been holding back. Tears started to fall from my eyes, and through them I wrote, “Even if that truth is ‘I’m afraid no one will take me seriously because I’m a woman writing about women and that I fear admitting that will make people dismiss me as weak?'”

“Yes, absolutely,” he said. “Here’s the thing. That’s the meta-truth. But there’s truth other than that. That’s the other truth. You’ve got to allow yourself to have something to say. Otherwise this is pointless.”

We worked on it for a while longer that night, rewriting the ending to get at the heart of what I was trying to get across.  I think the result was powerful, and that was affirmed by both his statement that he was proud to run it, and positive comments from many of the people who read the finished piece.

My point here isn’t “I wrote a good thing.” What I thought about this morning as I listened to the sermon, and what fills me with emotion each time I think about it, is how my friend Rich pushes me to be true to myself in my writing. In this case, he warned me ahead of time that he was going to “edit it to death”, not because he thought my draft would be bad but because he wanted it to be great, and he wanted me to have the freedom to write without second-guessing myself (which I did anyway). He listened when I panicked, overwhelmed and upset after doing too much research. He all but ordered me to take a walk and to not do any more research, because I already knew everything I needed to know. I’m still new to the idea of writing for an audience other than myself, and my confidence in it is still shaky at times. Having folks like Rich and Drew to lean on has been a life-giving experience.

Following Christ means that we are bound together with other Christians as a family. We use our various gifts to build each other up not out of obligation, but out of love. Not just out of love for one another, either, but out of love for Christ, out of a desire to see our brothers and sisters use the gifts that God has given them to their best ability. We want to be like lamps that shine light into the dark places in the world, as Jesus commanded us (Matt 5:14-16) and we can do that most effectively when we do it together.

Then we will no longer be infants, tossed back and forth by the waves…. Instead, speaking the truth in love, we will grow to become in every respect the mature body of him who is the head, that is, Christ. From him the whole body, joined and held together by every supporting ligament, grows and builds itself up in love, as each part does its work. (Ephesians 4:14-16)