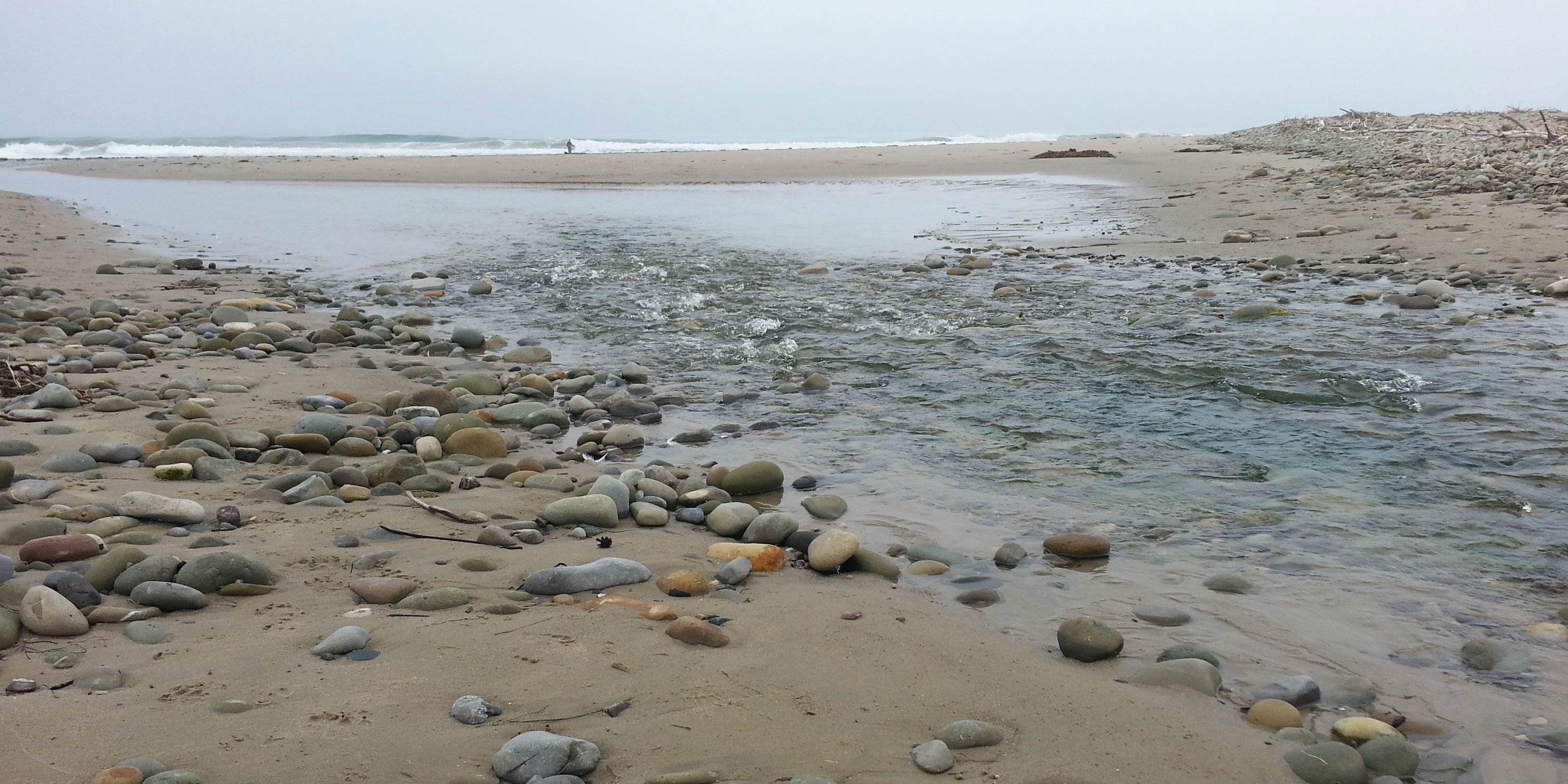 One or two mornings a week, when I’m not scheduled for work or a meeting, I drive down to the beach for some prayer and meditative time. I start at a bench on the Promenade, sipping my coffee, watching the surfers like sleek black seals bobbing and dancing in the waves. Then I walk up the coast, moving down to wade at edge of the water, and end up sitting by the Ventura River estuary. The last few weeks, I told myself I needed to remember to pack a notebook so I can write down some of my thoughts while I’m there. This week I finally remembered, and here’s what I wrote.

Every time I come out here, the trickle that is the Ventura River has changed its course and the old WWII gun turret is in a different stage of being uncovered or buried by the sand. I think of the beach as an immovable, unchanging strip of land that meets the shifting, moving tides, but the reality is more complicated than that. The tides and river are always shifting the sands and plotting out a new course, a new shoreline. The sand I’m walking on today isn’t the same sand I walked on a week ago.

I also tend to live under the illusion that my path in life has a set destination that I’m moving toward, and lately (most of the time?) I feel like I’ve wandered off course. But there, too, I think I’m wrong. My path is meant to shift and change and adapt to the circumstances around me at any given moment. The “goal” of my life is not some fixed point I’m aiming toward and have not yet reached. When I feel restless, aimless, and confused by not feeling clear direction in what God wants from me, it’s not because I’m off course. It’s because I’ve stopped looking to Him as the guiding star, and I’m simply going through the motions, attempting to “figure things out” on my own. He’s led me this far safely – I can trust him to lead me forward. I just need to actually trust that He’s the steady immovable one. Not anything about my circumstances.

I haven’t been doing that. I’ve been saying I trust Him, but then I’ve been trying to sort through my confusion through my own mental powers. Focusing on myself and the shifting sands instead of the One who never shifts.

“My hope is built on nothing less
Than Jesus’ blood and righteousness;
I dare not trust the sweetest frame,
But wholly lean on Jesus’ name.
On Christ, the solid Rock, I stand;
All other ground is sinking sand.”

Edward Mote, “My Hope is Built on Nothing Less”